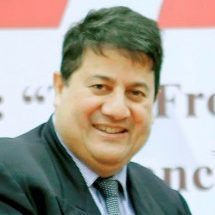 Professor Janek Ratnatunga, CEO of the Institute of Certified Management Accountants (Australia & New Zealand), says that the Australian Federal Government should be offering megabucks – at least 1 million dollars each, for every person who dies as a direct result of a Covid vaccination. And he has the numbers to back him.

In an hard-hitting opinion piece he says that to date, only 14.2 percent of the total Australian population, or 3.7 million people, have been fully vaccinated and 31.7 per cent (8.1 million) have received a first dose. He says this abysmal take-up is because an unexpectedly large number of the population is either hesitant, or downright resistant, to taking a COVID-19 vaccine, especially the AstraZeneca vaccine.

Prof Ratnatunga says that numerous proposals to improve voluntary uptake of COVID-19 vaccines have been advanced; but despite all this significant vaccine hesitancy remains as these campaigns have failed to cut through the noise.

Recently, there have been several proposals to pay cash incentives such as a weekly, million-dollar lottery for all who are vaccinated. President Joe Biden has proposed to offer US$100 to each person as an incentive to get vaccinated.

Clearly, all the research indicates that the number one reason for vaccine hesitancy, especially of the AstraZeneca vaccine, is that the vaccination will result in developing a blood-clot which will eventually kill them.

The question is, “How much are they willing to accept to take this risk?”

“Would a ‘Million Dollars’ that goes to their next of kin should they die as a direct result of the vaccination be sufficient compensation?”

Prof Ratnatunga says that though there are a plethora of legal, ethical and moral implications that would need to be addressed in estimating the actual amount of the monetary compensation, the management accounting numbers are extremely simple to calculate.

As Australia’s population is approx. 26 million, a maximum of 260 cases of possible blood clots could develop when all are vaccinated. Taking the UK statistics of resulting deaths and doubling it, this could result in about 104 deaths in total. The Federal government could give affected families $1 million each, for a total cost of $104 million.

Prof Ratnatunga says that the government could even give families of those who die of the vaccine $10 million each and come out well in front.

It is megabucks, not lotteries nor beer money that will overcome vaccine hesitancy, he concludes.

About the Author
Professor Janek Ratnatunga is the CEO of the Institute of Certified Management Accountants, Australia & NZ. He has held senior appointments at the University of South Australia, Monash University, University of Melbourne, and the Australian National University in Australia; and the Universities of Washington, Richmond and Rhode Island in the USA. Prior to his academic career he worked as a chartered accountant with KPMG. He has also been a consultant to many large Australian and international companies and to the World Bank.